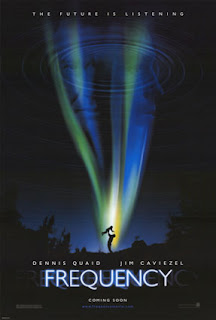 Frequency Movie  is a film of 2000 that contains elements of different film genres, such as time travel , suspense, and counterfactual history. It was directed by Gregory Hoblit and written by Toby Emmerich. The cast included Dennis Quaid and James Caviezel as Frank and John Sullivan, father and son respectively. Filming took place in the cities of Toronto and New York. After its release, it obtained positive reviews by the specialized press,

John Sullivan, a police inspector, is still haunted by his father's death, which occurred during a spectacular fire in 1969. Through an illuminated night of aurora borealis and magnetic lightning, John starts an old radio and believes Hear the voice of a man. Upset, he recognized his father. Beyond death and time, the two men talk to each other. But every miracle has a price and the sequence of events will be modified. Faced with the strange wave of murders that is triggered, father and son will fight, each in its dimension.